Back in January, as we reflected on 2017 in the markets, we were looking back on an incredible year of strong returns and low volatility. Despite an endless stream of news that you might ordinarily think would cause markets to tumble, we never even saw the slightest dip. To say the first quarter of 2018 has seen a stark reversal of 2017 would be a vast understatement.

Thanks to a very strong January, the ensuing drops in February and March didn't hurt overall returns for the year. Large cap, mid cap and small cap US stocks were all down less than 1% for the quarter. International developed market stocks did slightly worse, falling a little over 1%. International emerging market stocks actually posted a positive return of just over 1%. The worst performer by far in the first quarter were REIT's, which fell over 6% on the quarter. Bonds didn't fare much better as most bond indices were down about 1% for the quarter.

It might have felt like you were on a roller coaster for three months, but after some scary ups and downs, the train pulled right back into the station where you started. What happens next is anyone's guess. If you read the news every day you know there are plenty of reasons for concern. What started as tariffs on steel imports has been followed by an escalating series of tariffs between the United States and China. Two of the largest companies in the S&P 500 have seen their share prices fluctuate wildly for different reasons. Facebook is embroiled in controversy over a massive leak of private user data, while Amazon has been the target of a series of tweets from our President.

Yet despite all these scary headlines that will likely continue to lead to volatility in the markets, our economy keeps chugging along. The unemployment rate continues to fall and GDP growth continues to rise. Inflation has increased slightly but remains in check and the Federal government continues to increase interest rates and reduce their balance sheet. Markets around the globe are all showing signs of continued improvement.

We understand it might sometimes feel like the sky is falling and the daily barrage of news certainly doesn't help. It's important to keep in mind these are all short-term concerns and you are investing for the long-term. This chart from JP Morgan does a great job illustrating the variability in returns in the short-term vs the long-term. Over a one year time horizon you could see stock returns anywhere from -39% to +47%. Over five year periods that spread narrows to -3% to 28%. Over ten year periods it narrows further to -1% to 19%. And over all rolling twenty year periods since 1950, stocks have never provided a negative return! 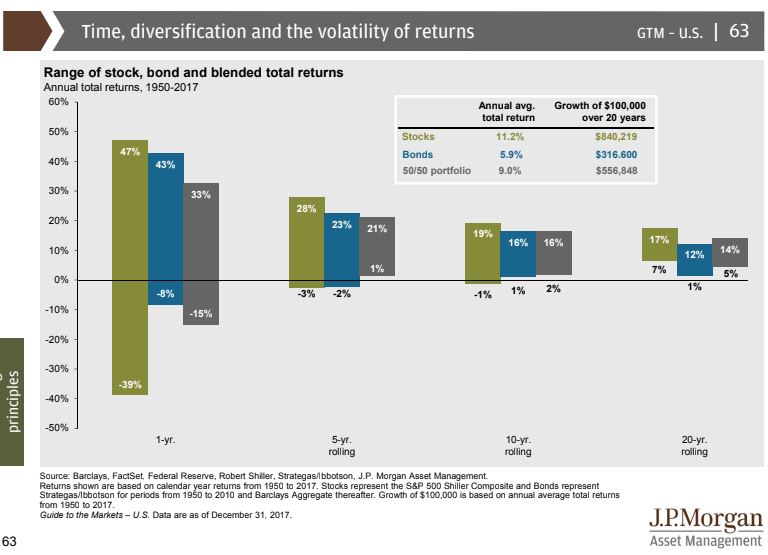 If we know returns will fluctuate greatly from year to year but over the long-run those fluctuations diminish, why do we spend so much time focusing on what the market did yesterday? It's human nature to behave this way but we can overcome some of these instincts if we work on it. We are here to help you focus on the important things in life that you can control so let us worry about those things you can't control.

The views expressed represent the opinions of L.K. Benson & Company and are subject to change.  These views are not intended as a forecast, a guarantee of future results, investment recommendation, or an offer to buy or sell any securities. The information provided is of a general nature and should not be construed as investment advice or to provide any investment, tax, financial or legal advice or service to any person.Please see Additional Disclosures more information.