Looking back on the first half of 2020 in the investment markets, I’m reminded of the phrase “If you don’t like the weather, just wait five minutes and it’ll change”. Back in April we were discussing the fastest ever 30% drawdown in the S&P 500, and by June we had already seen the best fifty-day rally in the history of the S&P 500! We are used to seeing markets bounce around from month to month and quarter to quarter, but we’ve never seen such a sharp drawdown followed so quickly by such a sharp rally. We started the year with the worst quarter for the S&P 500 since Q4 2000, then followed that up with the best quarter for the S&P 500 since Q4 1998. The S&P 500 finished the second quarter up over 20%, after declining just under 20% in the first quarter.

The S&P 500 wasn’t alone in this rise, as small cap stocks had an even greater second quarter, leading the way higher with a 25% return. International stocks joined in the recovery with developed markets posting a 15% return and emerging markets 18%. REITs rebounded a little more slowly with a 13% return on the quarter, and even commodities managed a positive quarter, with a 12% return on gold leading the way. Bond returns were more muted but were still positive across the board with the Barclays US Aggregate index up about 3% on the quarter.

The rapid rally in the investment markets has come as a surprise to many, as we are still very much in the middle of a battle against a global pandemic. While many countries around the world have seen success in their fight against COVID-19, the US and others are seeing an increasing wave of infections. The biggest question in every investor’s mind right now is, “Why are markets ignoring all the bad news”?

It’s important to point out the markets are not completely “ignoring” the bad news. Since early June, when cases started to rise again in many parts of the US, markets started to trend downward again. 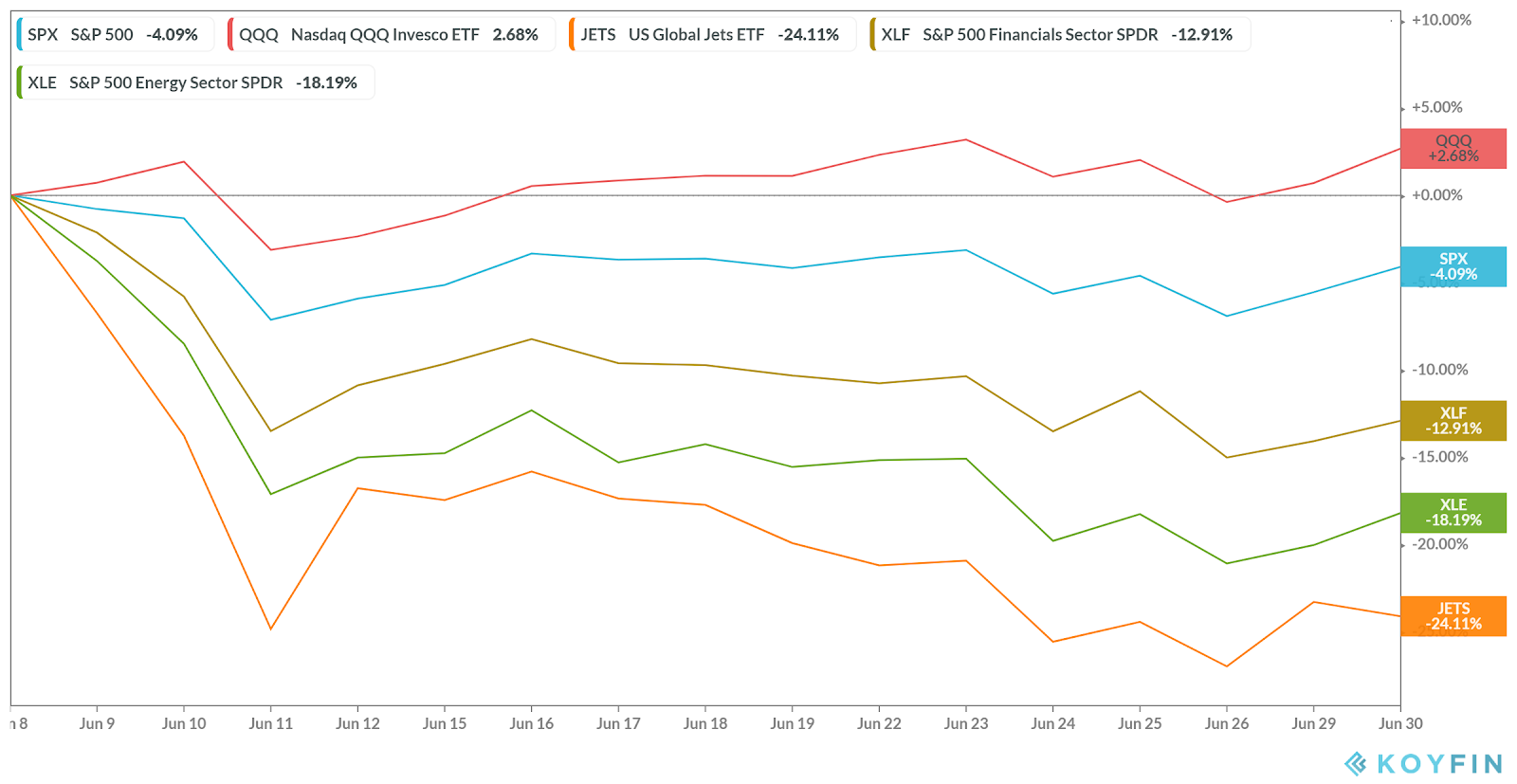 From June 8th through the end of the quarter, the S&P 500 fell about 4% and small cap stocks fell 6%. While the tech sector has continued to show strength and buoy the overall market index, banking, airline and energy stocks have seen a clear downturn, as can be seen in the chart to the right.

Still, many of you are likely wondering how the markets managed to bounce back so quickly, when our lives still haven’t even come close to getting back to normal. There is never a simple explanation for why the market does what it does. “The market” isn’t one person's decision on what should happen next, it’s a collection of millions of market participants, all with their own thoughts, opinions and goals. Rather than try to identify what caused the market rally, let’s look at some of the factors that likely had an impact. 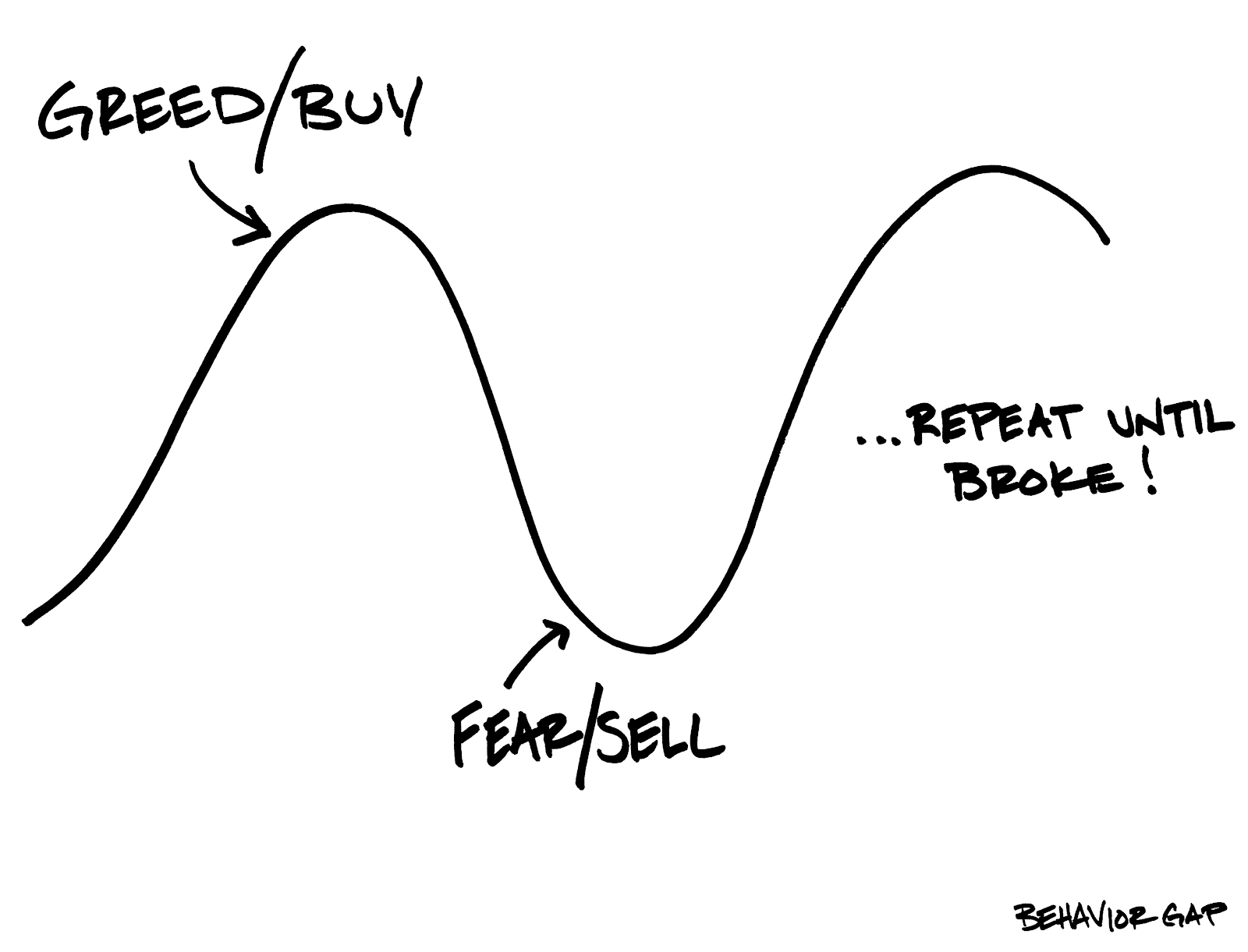 We use this chart often to illustrate the cycles we see in the markets and in investor behavior. We naturally overreact when things get scary. We see the markets falling and can’t help but feel afraid and think we have to get out of the market. This type of fear-based selling can take hold of the market and drive prices lower. This sometimes leads to an overreaction where the market falls further than might be warranted by the scary news headlines.

Was the news scary earlier this year? Absolutely. Should it have driven the markets down as far as it did? Maybe. But as of right now, investors have decided that was an overreaction and switched gears in record time from fear/sell to greed/buy. Are we at the top of the next cycle getting ready for another decline? Just as we didn’t know in March we were at the trough; we won’t know now if we are at a peak until sometime in the future.

The US government stepped up in a big way in March with several stimulus packages. These included $1,200 stimulus payments to millions of taxpayers, a significant boost to unemployment benefits and small business relief in the form of PPP loans. The Federal reserve also stepped in to provide liquidity to the markets in March, making it clear they would do whatever it takes to support the economy through this pandemic. As states implemented “stay at home” orders, they had to hit pause on economic growth so these relief measures were sorely needed. Many of these support measures are set to expire at the end of July and it remains to be seen whether the government will extend them or implement new measures. 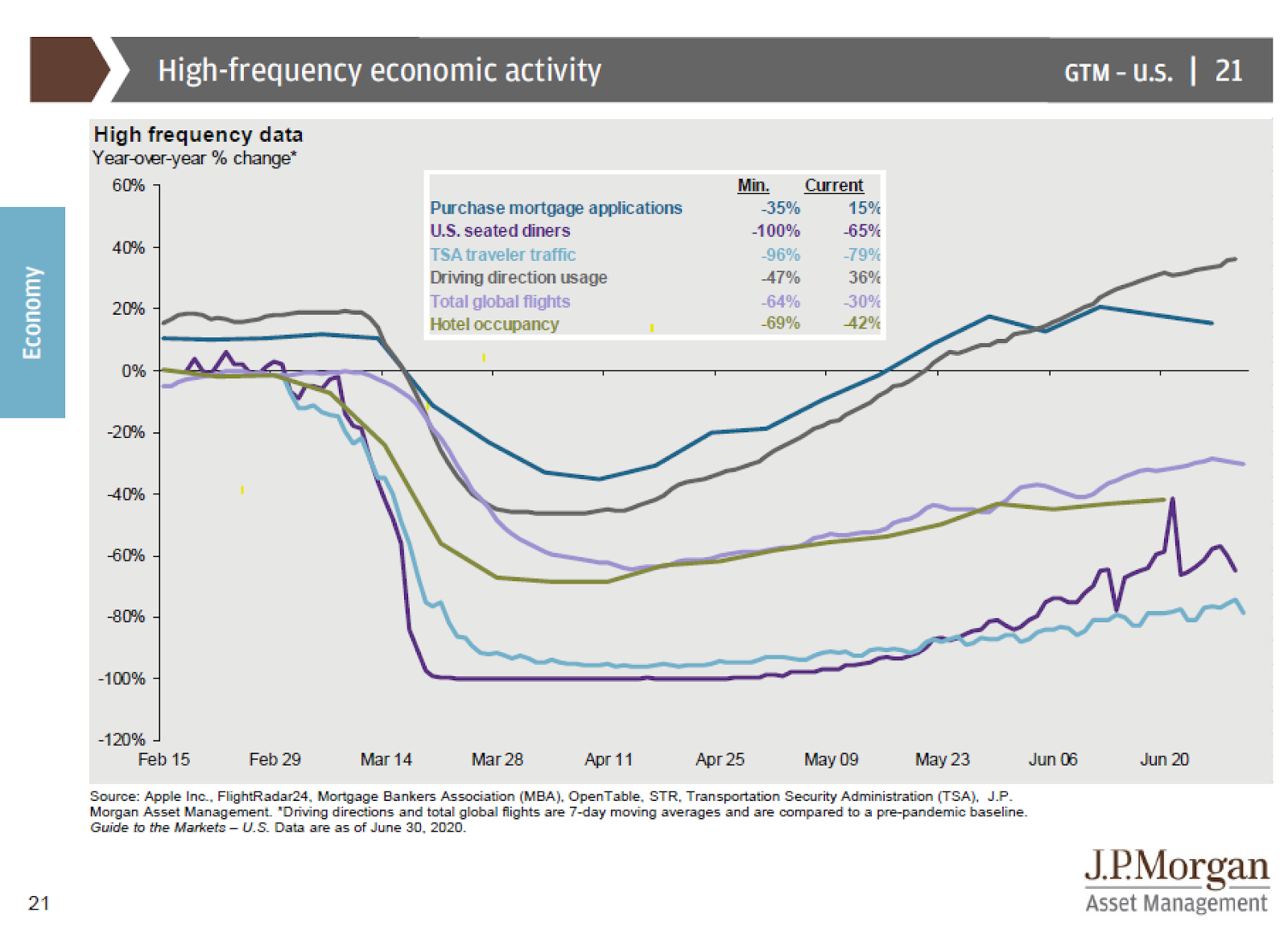 We’ve recently seen some additional economic numbers that point to a V-shaped recovery as well. The

chart to the left (via @TheStalwart) shows the sharp rebound in total compensation and total retail sales in green and yellow. It also helps to highlight how much government support is helping, as the pink lines show that employment and salary numbers without unemployment insurance have not recovered nearly as fast.

Overall, the news on COVID-19 hasn’t been great. We still have limited treatment options, there is no vaccine yet, and the summer heat didn’t seem to dampen the spread as some had hoped. But if you look a little deeper, there have been many positive developments in the fight against this virus. Researchers are making strides on vaccine development and there are advanced trials already underway. We have discovered some treatment options that have proven to be more effective and we are seeing a much lower fatality rate than we saw in the hardest hit locations back in March. We are still learning something new about this virus every day and each piece of positive news tends to lead the markets higher.

While most areas of the markets saw a strong rally in the second quarter, tech stocks continued to dominate all other sectors. The NASDAQ index finished the first half of the year up 17%, which seems unbelievable given what we have been through in 2020. But these are the companies we rely on during shutdowns more than ever so it should not be that surprising they have performed well. They are also the largest companies by market capitalization in the world, so their returns tend to drive overall market returns.

This probably had a much lesser impact on market performance, but it’s interesting, nonetheless. There is a theory out there that Matt Levine at Bloomberg calls the “Bored Market Hypothesis”. The theory essentially says there are a lot of people with nothing to do right now so they are turning to day trading as entertainment. Sports, movie theaters, plays, even new TV shows, have all been shut down at the same time we were all stuck at home. Data from Robinhood, a popular free stock trading app, shows a huge increase in signups and trading activity, starting around the bottom of the market. While it’s unlikely these retail traders were moving the overall stock market, they certainly had an impact on certain stocks. For example, Hertz stock had a huge rally AFTER declaring bankruptcy, and Tesla shares have absolutely soared this year, certainly helped by the thousands of Robinhood users buying it. Day trading has become popular again, which is just as dangerous as it’s always been.

Each of the above factors have had some impact on the strong rally in the markets since the March lows. Unfortunately, we cannot use these factors to determine what will happen next, as there will surely be new factors we cannot see right now that will impact the markets.

As we reflect on this year in the markets, I wanted to share this quote from James Clear, in his recent newsletter:

Be forgiving with your past self.

Be strict with your present self.

Be flexible with your future self.

I think we should all take some time to reflect on these words, especially as they relate to our finances. If you reacted to the market selloff in March or wish you had bought at the bottom, forgive your past self, those are natural emotions. If you want to sell today after the strong rally, be strict with your present self. Remember you have a plan in place and use that plan to guide your investment decisions. And when you look out into the future, remember the world is constantly changing, so you must be flexible with your future self. The financial plan you have in place now could change tomorrow, so be prepared to adjust accordingly.