With COVID-19 cases trending back up across the country, stimulus talks still ongoing, and an election just a couple of weeks away, it might feel like 2020 is the year that will never end. There is plenty of negativity to be found in the world right now, but not if you look at recent performance in the investment markets. In the third quarter, US stocks continued their gains from the second quarter with the S&P 500 posting a 9% return and the Russell 2000 up 5%. International markets also had a strong third quarter with the MSCI EAFE developed market index up 5% and the MSCI Emerging Market index up 10%.

Despite extremely low yields, bonds also posted positive returns in the third quarter, with the Barclays Aggregate index up about 0.6%. High yield bonds were up 5% and TIPs were up 3%. Moving to alternative assets, REITs were up between 1-2% on the quarter, commodities were up 9% and even Gold continued its strong performance with a 4% return.

The big question on everyone’s minds right now is what will happen in next month’s election and how that will impact the markets. Most polls currently show Joe Biden with a lead over President Trump, but we all remember what happened in 2016 when the polls were also showing a lead for Hillary Clinton. The lead looks larger this time around, and pollsters made some adjustments after 2016, but we know anything is possible. 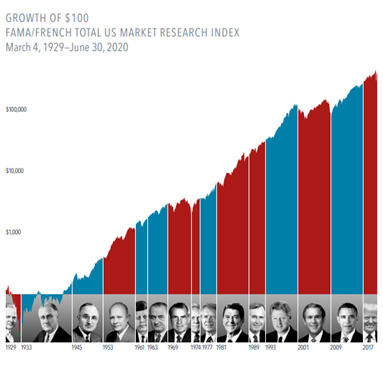 markets. Regardless of which side of the political fence you fall on, there are far greater issues at stake in this election than what will happen in the investment markets. This is an important election for many reasons, but you should not let your political preferences cloud your judgment when it comes to your portfolio. Below are a few reasons why you should keep politics out of your portfolio.

Markets generally go up regardless of the president. It is common to think that markets perform better with a president from one political party vs another. However, history has proven that markets generally post positive returns over the long-term, regardless of who the president is. The chart to the right from DFA illustrates market returns since 1929 under presidents from both political parties. 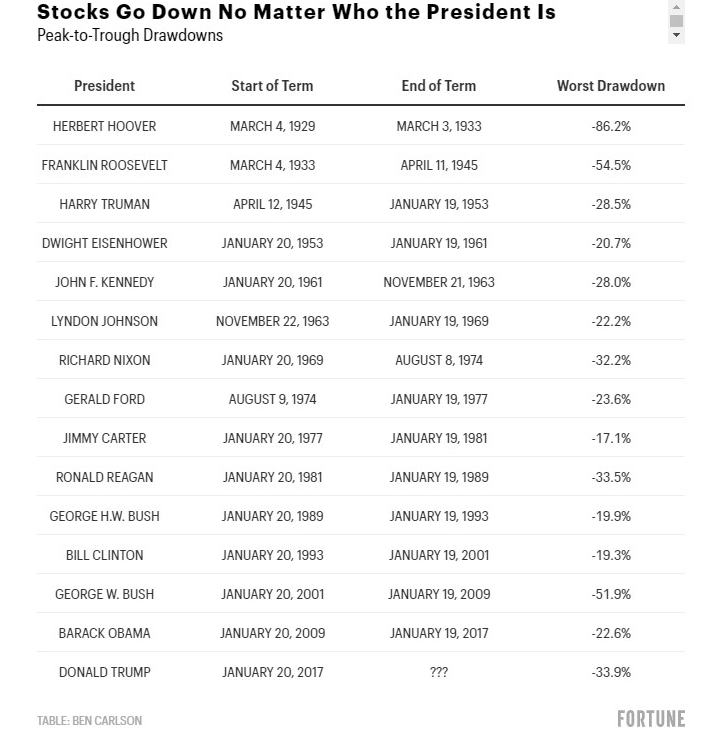 The president cannot prevent market declines. In 2016, many people feared a market crash if Donald Trump were elected president. While the unexpected result did cause an initial decline as the election results were tallied, markets quickly recovered. This year many people fear a market crash if Joe Biden wins the election. We do not know if that will come true, but we know that if it does, it wouldn’t be unusual. Market declines are a natural part of the market cycle and they happen under all presidents. The table to the left from Ben Carlson outlines the worst drawdowns under each president since 1929. You can see that every president has seen at least a double-digit peak-to-trough drawdown during their tenure.

Other investors know as much as you do. Before you try to position your portfolio for a certain election result, think about all the other investors who have the same information you do. Investors are presumably already factoring in a potential Biden presidency, while not completely discounting the potential for another upset victory by President Trump. The one scenario that might cause the most distress for the markets would likely be a contested election, but even that scenario has been discussed so much it wouldn’t come as a complete surprise.

The Senate races will determine future policy as much as the President. Yes, the president is the most important position in the United States government, 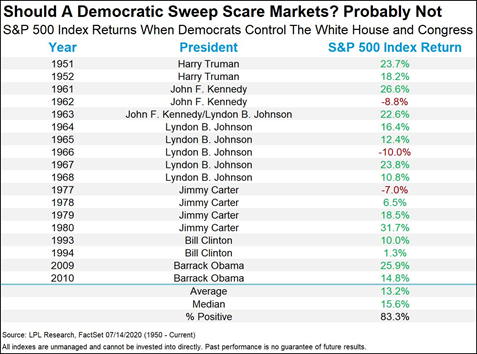 but we know that a divided Congress can prevent any president from implementing his policy objectives. According to the website FiveThirtyEight, Democrats are currently favored to win majority control of the Senate. If this happens, and they maintain control of the House and Biden wins the presidency, we’d be sure to see a lot of legislative action next year. This is a scenario that scares a lot of people who worry that the Democrats’ agenda will hurt the economy and market returns. While that could certainly be the case, history has proven otherwise, as can be seen in the chart to the right. Again, markets generally go up over the long-term, regardless of the political party in power.

Be prepared for year-end tax and estate planning now. We know what Joe Biden’s tax plan looks like and we know if there is a Democratic sweep, they will likely pass some version of that plan next year. We outlined some of the key points of this plan back in this blog post in August and will have a more detailed breakdown should that outcome happen. If your income is over $400k per year, you are most likely to be impacted by any tax changes, so you should be thinking of ways to accelerate income into this year.

Focus on things you can control. If you want to lose weight and get in shape the keys to success are eating less and exercising more. You might be hoping for a magic diet pill to come along that will make things easier for you, but don’t count on it. Likewise, the keys to financial success are saving more and spending less. Don’t expect to be able to predict the future of the markets and avoid every downturn and still participate in every rally. Invest for the long-term and focus on the things you can control, like how much you spend and how much you save.

Vote. No, there aren’t any perfect candidates on the ballot this year. There never are. But that doesn’t give you an excuse to not exercise your right to vote. Decide who you think would be best for our country for the next four years and cast your ballot.