Similar to the last two years, the first quarter of 2022 began with COVID fears front and center. The omicron variant was making its way across the country, leading to the biggest wave of infections we’ve seen since the pandemic began. Fortunately, with so many Americans already vaccinated or having some immunity from prior infection, this wave was nowhere near as deadly as past waves and the surge seemed to pass as quickly as it arrived. Unfortunately, a completely different kind of crisis quickly emerged as Russia invaded Ukraine on February 24th. Nearly two months later, Russia continues its unprovoked assault on Ukraine as it faces heavy economic sanctions from most of the rest of the world. The images coming out of Ukraine are heartbreaking and our thoughts and prayers go out to everyone involved in this senseless war.

In light of all this, it should come as no surprise the first quarter of 2022 was a difficult one in the markets. The major US stock indices all dropped, with large-cap stocks down 5% and small-cap stocks down 8%. Growth stocks suffered the greatest decline while value stocks fared better, as can be seen in the chart below from Morningstar. We’ve now seen a year of outperformance from value stocks compared to growth stocks, but growth still holds a slight lead over value over the last 3 years. 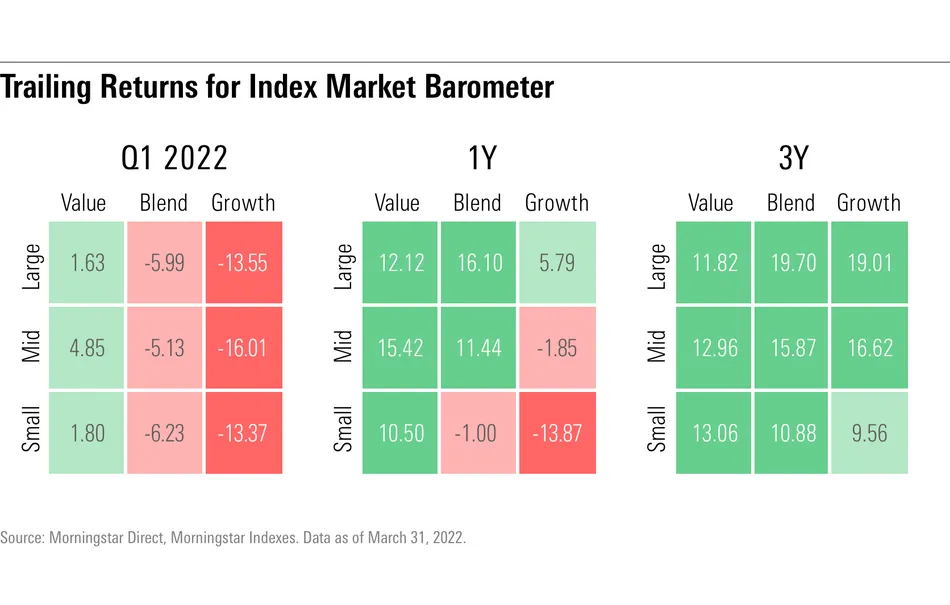 International stocks also declined in the first quarter, but similar to the US markets, international value stocks outperformed international growth stocks. Emerging markets stocks were down overall as the impacts of the Russian invasion of Ukraine were felt around the world. However, some emerging market stocks that are more tied to natural resources, like those in Latin America, performed well as commodity prices increased. Commodities were the one bright spot on the quarter with the Bloomberg commodity index up 25% and Gold up 7%.

Bonds also had a rough start to the year as the impact of the Fed’s rate increase plan and the elevated level of inflation took a toll. Long-term bonds suffered the worst losses as they are more sensitive to changes in interest rates, but all areas of the bond markets saw losses in the first quarter. The yield curve inverted towards the end of the quarter, as 2-year US Treasury yields briefly shot up above the 10-year US Treasury yield, though the 10-year yield has now edged back ahead of the 2-year.

After a rough quarter in the markets, our natural tendency is to focus on all the negatives. While we can’t sit back and simply ignore these negatives, it’s important to understand that not everything is so dire. Just as we try to remind you the good times won’t last forever, we also need to remember the same for the bad times. Let’s take a look at the three big worries for most investors right now: bonds, inflation and the economy.

Nobody likes bonds right now because rates have been going up, which means bond prices have been going down. Ironically, bonds have been disliked for years BECAUSE rates were so low and they wanted them to earn more! Now that rates have come up, nobody wants to own bonds, because they just lost money on their existing bond portfolios. Instead of focusing on the short-term loss, focus on the longer-term gains. The 2-Year US Treasury bond now pays over 2.6% after paying next to nothing since March 2020. While rates could continue to increase and bond funds will lose value as they do, they will also gradually start to roll over into new bonds at higher yields and that will lead to more interest income being paid by those bond funds. In the meantime, you might be able to take a loss for tax purposes from your existing bond funds, and reinvest the proceeds into a different, possibly shorter-term bond fund. 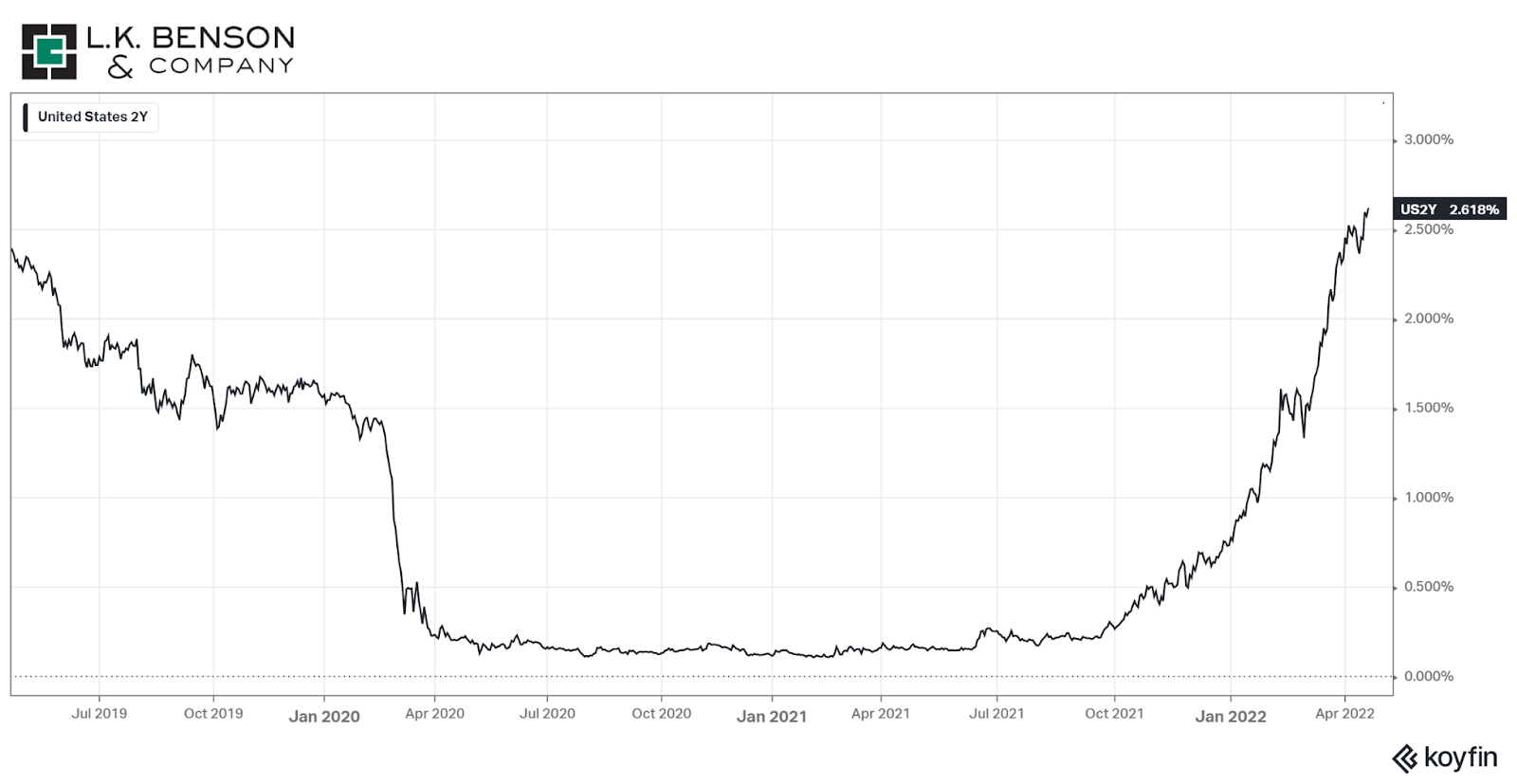 While 2.6% on a 2-Year Treasury bond looks good compared to the recent past, it still looks pretty bad when the latest inflation readings were over 8%. We know that real returns (after inflation) are more important than nominal returns and inflation can be damaging to a long-term financial plan so it’s not something to take lightly. Unfortunately, it’s also impossible to predict where inflation will go from here. The initial spike in inflation was driven by massive government spending programs and supply chain disruptions due to COVID. There were some signs that inflation was starting to temper down early this year, only to be reignited when Russia invaded Ukraine. While the focus has been on the impact of the war on oil prices, both Russia and Ukraine are also massive exporters of other commodities like wheat, corn and potash, which is a key ingredient in fertilizer used for crops all over the world.

I won’t try to tell you there is anything positive about inflation itself, but we shouldn’t assume the current high levels will continue forever. High prices can drive innovation as alternative options begin to look less expensive in comparison. We saw this in the fracking revolution that allowed the US to become one of the major oil producers in the world just as oil prices were hitting all-time highs in 2008. Europe has been shocked into reducing their reliance on Russian oil for their energy needs and this could lead to similar innovation that will be long-term positive for the world.

There is one other positive to inflation - the Social Security cost of living adjustment for 2023 is currently projected to be a record 8.9%. If you haven’t claimed social security yet, delaying those benefits continues to be one of the best “investments” you can make, given the annual 8% delayed retirement credit AND the annual inflation adjustment. If you are on Medicare, you’ll also see an increase in that expense, but you should still wind up ahead on your net benefits. As an example, if you receive $2,000 per month in benefits and pay $170 per month in Part B premiums, your net payment is $1,830. If both increase by 9%, you would receive $2,180 and pay $185 for a net benefit of $1,995, an increase of 9%.

Given the rapid rise in interest rates and inflation over the past few months, many experts seem to be in agreement that a recession is right around the corner. Some are even calling for a period of 1970’s style stagflation - a combination of slow economic growth combined with high inflation. These experts might be correct, but unfortunately none of them know when the recession will hit or how it will affect different areas of the market.

What we do know is that right now, the US economy appears to be in excellent shape. The labor market is still extremely tight and the unemployment rate continues to move down, now at 3.6%, which is the lowest it has been since the start of the pandemic. Job openings are also very high as employers continue to struggle finding workers, as can be seen in the chart below. Household spending and net worth remain elevated compared to last year. 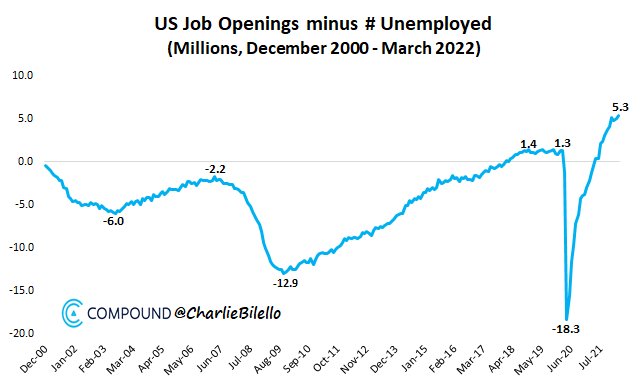 While the economy appears to be doing well right now, we know how quickly this can change. We might see a recession in the next year, or maybe in the next two years, but that doesn’t mean you should change your long-term investment plan. Recessions are a normal part of economic cycles and you have a diversified portfolio to get you through these difficult times. The best way to prepare for a possible recession is to make sure you have enough in cash and short-term investments to cover your living expenses for the next 2-3 years. If you don’t know what your living expenses are, you should take the time to review them and this will be a far more valuable exercise than trying to predict the next recession.

“Don’t just do something, Stand there”

We say this all the time but it bears repeating when the world seems scary and you feel the urge to make changes to your investment portfolio. Having a diversified portfolio means always owning something you hate, and after the first quarter of 2022 there are a lot of things to hate. Sometimes the best thing to do is to just ignore all the negative news and remember you are in this for the long haul. If you feel you need to do something, keep these in mind: