For the first time since the COVID crash last March, we saw some weakness in US stocks in the third quarter. While large-cap stocks were still up just under 1%, after six straight quarters of positive returns, US small-cap stocks were down about 4% on the quarter. International stocks didn’t fare any better, with developed market stocks down just under 1% and emerging market stocks down 8%.

In the bond markets, US bonds were mostly flat on the quarter as the US 10-year treasury yield started and finished the quarter just under 1.5%. The US aggregate bond index was up 0.1%, while high-yield bonds were slightly better with a gain of 0.9%. International bonds did not fare as well, losing about 2% on the quarter due to a headwind from higher rates and the stronger US dollar. Treasury Inflation-Protected Bonds (TIPs) posted the strongest gains on the quarter with a 1.8% return in light of higher inflation expectations.

The third quarter marked 18 months since the market bottomed out on March 23, 2020, at the beginning of the COVID pandemic. Here’s a chart of the S&P 500 over those 18 months, showing a steady ride up, as we discussed in last quarter’s commentary. 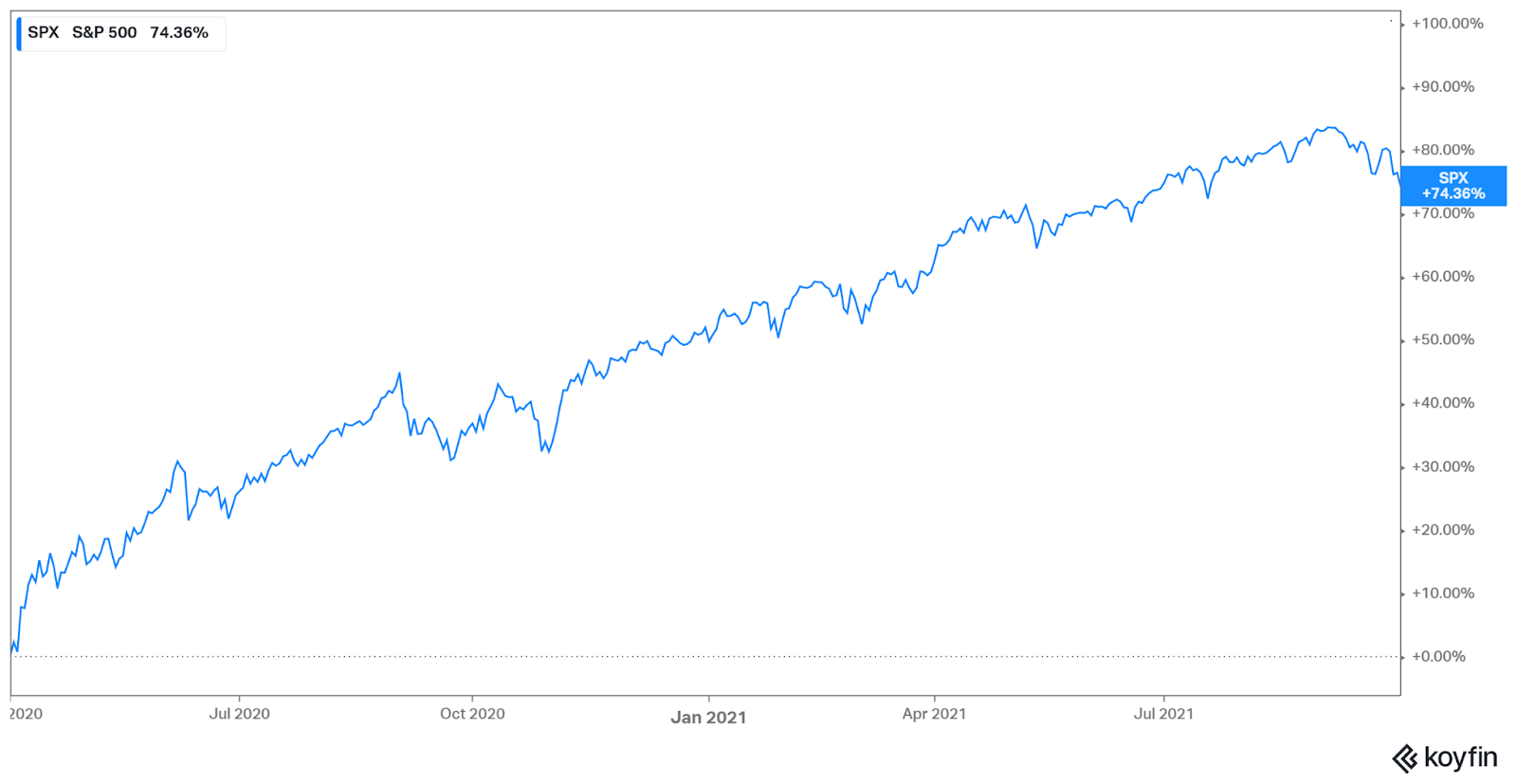 Now the question everyone wants to answer is whether this nice long wave is finally starting to crash? Unfortunately, nobody can answer that question in advance, but some might say we’ve already seen a correction. JC Parets, a talented technical analyst, pointed out back in July and again in September that many stocks have already corrected. As he puts it in a recent newsletter:

“You see, stocks have been correcting for most of 2021.

Half the NASDAQ stocks fell 20% this year.

Over 20% of NASDAQ stocks got cut in half this year.”

The indices we follow are market-cap weighted and that can sometimes disguise the underlying price action in stocks so it’s important to look beyond just the index to see what’s happening in the market. This doesn’t mean the market is done correcting and further corrections won’t happen, just that many stocks have already dropped quite a bit this year and many of those have also seen a rebound.

There are always things to fear in the markets, but as we explained at the start of the COVID pandemic, it’s ok to be temporarily scared but you shouldn’t live in fear.  As we approach Halloween, here are some of the issues that seem to be scaring investors the most right now:

Supply chain issues are causing product shortages and delays all over the world. At the same time, demand for goods remains high as consumers are flush with cash from savings during the pandemic and government stimulus payments. When you have low supply and high demand, prices will inevitably rise, and that’s exactly what we’ve been seeing in inflation numbers lately. Wages are also increasing as employers find it increasingly difficult to find employees, from restaurants to Wall Street banks.

While the Fed has taken the stance that this bout of inflation will be transitory, or short-lived, there is growing concern that it might last longer than anticipated. Many investors want to reposition their portfolio considering the potential for sustained inflation, but many of the assets that would benefit from this type of environment, like TIPs and commodities, have already seen their prices rise. Stocks are generally a good long-term inflation hedge so staying invested is one of the best ways to get through an inflationary period.

It feels like we have been talking about low interest rates forever, and in some respects we have. Rates have been declining for decades and have been at very low levels since the Great Financial Crisis in 2008/2009. Just look at this chart of the Federal Funds Effective Rate since 1955:

The Federal Reserve continues to indicate they will be slow to raise rates so a sudden and sharp increase in rates seems unlikely. However, it’s been a long time since we saw sustained inflation so if the current bout of inflation lasts longer than expected, bonds will struggle. Unfortunately, there aren’t many good alternatives to bonds for the “safer” portion of your portfolio, with cash yields near zero. There are some areas of the credit markets that might be more attractive if inflation continues, like TIPs and floating-rate loans, but those come with their own risks. We believe the best approach, for now, is to stick with short-intermediate duration bonds and to diversify across different types of bonds.

We have a more detailed article on the proposed tax legislation released by the Ways and Means Committee in September here, but the overall theme is higher tax rates, and nobody likes paying more in taxes. Many are worried that higher proposed tax rates on capital gains could trigger a crash in the markets as people rush to sell at lower rates. This is likely why the proposed legislation includes a retroactive effective date so any sales done after the legislation was announced would be under the new rates.

While a retroactive tax rate might keep individuals from rushing to sell, a higher corporate tax rate will certainly hurt corporate profits. However, the proposed corporate tax rate is still well below the rate that was in place before the TCJA and the market was doing well before that tax law was introduced. There are so many unknowns regarding what will be in the final tax legislation and how it might impact the markets, there’s no reason to lose sleep over this right now.

Prior to a few weeks ago, it’s unlikely that many people had ever heard of a company called Evergrande, but now it’s common to hear people calling it “the next Lehman”. Evergrande is the largest real estate developer in the world’s second-largest economy, China. I won’t get into the details here (this article is a good primer), but the bottom line is that the company has a massive amount of debt and it’s unclear if they’ll be able to pay it. They pose a systemic risk to the Chinese economy, but it remains to be seen if or how that might impact the US economy, which has little exposure to the company. We’ve already seen this weigh on emerging market performance, as most emerging markets funds have significant exposure to China. We still believe the emerging market asset class is an important part of a diversified portfolio, but there are funds with little or no exposure to China that could be considered.

This might not be on your radar yet, but as we enter the cold winter months it could gain prominence as the next big fear. This chart of natural gas prices in Europe is frightening.

As with the inflation fears, this price increase is part of a chain reaction that can at least partly be blamed on COVID. It appears to have started in China, which has historically relied on coal power but is trying to reduce carbon emissions by scaling back this reliance on coal use. At the same time, they have placed restrictions on coal production and imports, demand has soared with the global economic recovery from COVID. Yet again we have high demand and low supply leading to increased prices. This should be great news for energy companies, and we’ve seen the energy sector do incredibly well of late. However, this is a very volatile asset class, as we saw in April of last year when the price of oil briefly dropped below zero.

As you can see, there are many things to be scared of in the markets right now, just as there have been many things to be scared of for the past 18 months, and for the many years before that. The investment markets will never feel completely safe, because if they did then there wouldn’t be any reward for the risk you take investing. You could try to jump from one asset class to another based on what you are most scared of now, but the better strategy is to build a diversified portfolio that will get you through any market environment. If you have any questions about your investment strategy or feel the need to make any changes, feel free to reach out to us.