The third quarter was yet another strong one in the markets, particularly for U.S. stocks. The S&P 500 returned close to 8% on the quarter and is now up over 10% for the year. Small cap stocks didn’t fare quite as well this quarter with the Russell 2000 index finishing up 3.5%, but they are up 11.5% year to date. International stocks bounced back a little bit with a positive 1% return and are only down about 1% on the year now, as measured by the MSCI EAFE index. Emerging Markets stocks continued to trail all other stock categories with a 1% decline and they are down over 7% on the year.

In the bond market, the 10-year Treasury yield rose about 0.2% to finish the quarter above 3% as the Federal Reserve again raised interest rates. The continued rise in interest rates led the Barclays Global Aggregate bond index to decline about 1% on the quarter while the Barclays US Aggregate Bond index was flat. Both are in negative territory for the year, down 2.3% and 1.6%, respectively.

All eyes have been focused on the bond market in recent months as the Federal Reserve continues to raise rates and shrink their balance sheet in the face of a strong global economy. The march upwards in interest rates has been steady but gradual and while bonds generally lose value when rates rise, new bonds issued at higher yields are beneficial for those in retirement.

One area of the bond market that has drawn particular interest in recent months is the yield curve. In basic terms, the yield curve is represented by a chart with the yield represented on the left or “y” axis, and the term to maturity on the bottom, or “x” axis. A “normal” yield curve typically looks like the chart to the right

The longer-term the bond maturity, the higher the yield. You can see this easily when looking at CD rates at your local bank. These days they might offer 1% interest for a 6 month CD, 1.5% for a 12 month CD and 2% for an 18 month CD.

However, there are times when the yield curve can flatten, or even become inverted. That means longer-term bonds have similar or lower yields than shorter-term bonds. Throughout the course of U.S. history, every recession has been preceded by an inverted yield curve. As you can expect, given that historical relationship, market watchers start paying very close attention to the yield curve when it begins to flatten, as it has been doing this year.

The natural reaction to such news is to wonder if it’s time to get out of the markets. Unfortunately, as with all forward-looking indicators, this one is not perfect and won’t allow you to time the markets with any sort of precision. The lag time between the start of an inverted yield curve and the start of a market correction has been anywhere from 2 to 23 months, while the lag time between inversion and the start of a recession has been anywhere from 10 to 24 months. (Source). In the meantime, the S&P 500 return during that lag time have generally been positive, with returns as high as 37.6%!

When it comes to the predictive power of the inverted yield curve, many economists argue that this time might be different. While we agree with John Templeton’s sage advice that “This time is different” are the 4 most costly words in investing, we also recognize that history never repeats itself in the same way. There have been numerous cases over the past 20 years in other countries where an inverted yield curve has not led to a recession. Some economists argue the yield curve itself has been distorted by unprecedented central bank buying of long-term bonds. There are numerous ways our world has changed in recent years so it remains to be seen if this relationship remains the same as it always has.

You will likely hear more about the yield curve in the news if it does continue to flatten and the spread between 10 year and 2 year treasury yields narrows. Everyone likes to attempt to predict the next recession or market crash and there is never a shortage of potential causes. Just look at this chart from Merrill Lynch showing the biggest tail risk as measured by a poll of global fund managers since 2011. This essentially shows what professional investors were most worried about each month and how concerned they were: 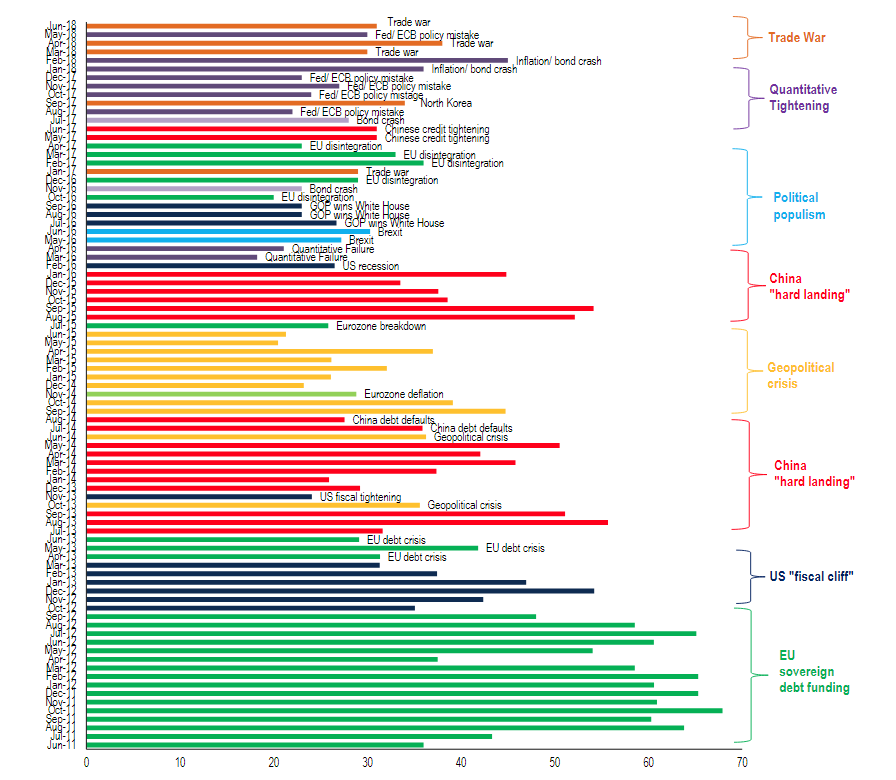 Rather than worrying about the “fear of the month” and trying to time the markets, we continue to believe the best path forward is to broadly diversify your portfolio and to rebalance regularly. It’s a boring strategy that might not get us a feature on the news, but it will serve you well in the long-run.

The views expressed represent the opinions of L.K. Benson & Company and are subject to change. These views are not intended as a forecast, a guarantee of future results, investment recommendation, or an offer to buy or sell any securities. The information provided is of a general nature and should not be construed as investment advice or to provide any investment, tax, financial or legal advice or service to any person. Please see Additional Disclosures more information.